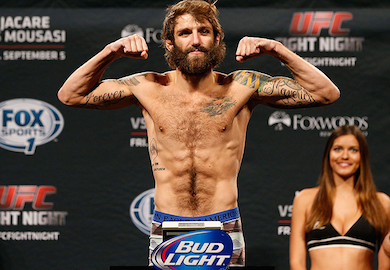 Michael Chiesa and Joe Lauzon put on a spectacular performance at UFC Fight Night 50. Unfortunately the bout was cut short by a cut that Lauzon opened up above Chiesa’s eye with a knee to the head. The doctors stopped the fight, which prompted a frustrated Chiesa to call for a rematch.

Chiesa spoke with MMAJunkie about how the $50,000 fight of the night bonus didn’t make up for the loss.

“It’s a pretty decent cut, but I’ve seen worse, and I’ve seen fights go on after worse cuts. I’m not going to sit here and act like it’s some chicken scratch. It’s a bad one, but this is the hurt business, you know?”

“It just upsets me. I’m not taking a shot at the commission, but I feel like they should have at least given me through the round. Herb did his job coming in and checking the cut, but we train three months for one moment. To take it away from me in a fight where I was never out of the fight isn’t right.”

“When he got done with that flurry, he was gassed, I put it on him, and then they came in and checked the cut. From the cuts that he’s had and how educated he is, for him to say he knew they were going to stop it is a crock of s–t. There’s no way he covered up and waited for them to stop it. He was striking back, and I was coming on. He was tired. It’s just a heartbreaker.”

“For people that watch me, they know how I fight. I’m better the longer the fight goes on, and we were competing. I was never out of that fight at any point.”

“I’m gunning for a rematch. Everybody wants to avenge their losses, but I didn’t lose. There’s no way. I refuse to accept that I lost that fight. If Joe was handling me and kicking my ass and a cut stopped it, I’d probably take it with a little bit more dignity and accept it. But I’m not going to accept it.”