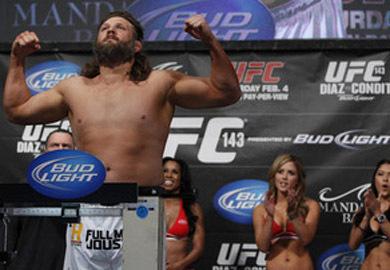 Kongo last saw action in July of 2012, where he scored a win over Shawn Jordan at UFC 149 in Calgary. With the win, Kongo improved his record to 4-1-1 in his past six fights. Prior to the Jordan fight, Kongo suffered a KO loss to heavy handed heavyweight Mark Hunt at UFC 144 in Japan.

Meanwhile, Roy Nelson looks to earn his third victory in a row when he faces Kongo this April. “Big Country” has scored back-to-back first-round knockouts over Dave Herman and most recently Matt Mitrione in his past two outings. Prior to his two fight win streak, Nelson had gone 1-3 in his past four fights, suffering losses to Fabricio Werdum, Frank Mir and Junior dos Santos in the process.

UFC 159 is headlined by a light heavyweight title match between current champ Jon Jones and challenger Chael Sonnen. The event is scheduled to take place on April 27 live from the Prudential Center in Newark, N.J.