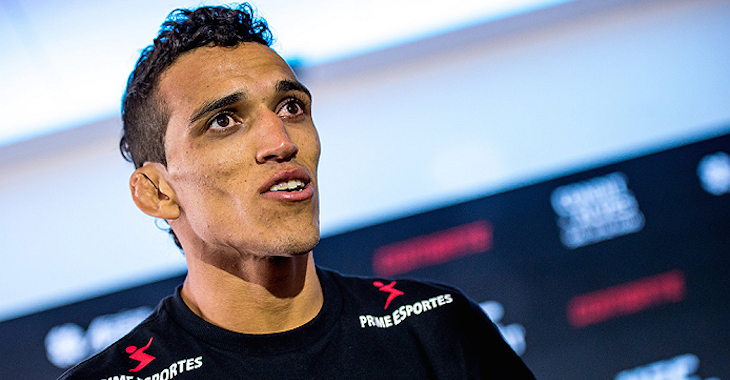 UFC fans witnessed a scary moment on Sunday evening at “UFC Fight Night 74” when Charles Oliveira was stretchered out of the octagon after falling victim to a neck injury.

Oliveira shot for a takedown which Max Molloway easily shrugged off. Holloway wanted nothing to do with the grappling ace on the ground and demanded he get back to his feet. “Do Bronx” stood back up, but immediately clutched his neck and shoulder. Holloway smelled blood as Oliveira backed up against the fence on his own accord, but held back from landing bombs as he could tell something was wrong with the Brazilian.

Holloway landed two soft shots before the referee stepped in and waved off the fight.

“I injured my neck in training, but did physical therapy and thought everything was fine, but when I felt against the cage everything went numb, I couldn’t feel my body,” Oliveira told MMA Fighting. “I’m still doing a lot of exams here at the hospital.”

The fight was announced back in June and Oliveira was excited to prove he belongs in the top five of his division. He is hoping for another opportunity at Holloway somewhere down the line.

“I trained really hard for this fight,” Oliveira stated. “I would like a rematch because there was no fight. I got injury literally in the first time I attacked.”

Do you think Oliveira should get a rematch, or is Max Holloway going to move on to bigger and better things? Share your thoughts in the comment section below!