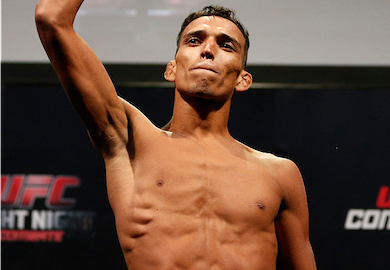 Charles Oliveira and Nik Lentz were set to face off in a highly anticipated rematch this past Friday at UFC Fight Night 50, however Oliveira came in nearly 5-pounds over the featherweight weight limit.

Shortly afterwards it was announced that Oliveira was off the card, and the bout with Lentz was off.

Du Bronx spoke with MMAJunkie about the situation:

“I am very sad about everything that happened this week, but I know that I’ll come back stronger. I felt ill and was unable to make the weight or fight. I started feeling sick in Brazil. As I’m the one who asked for this fight, I really tried my best but wasn’t able.”

“I couldn’t even stand up. My immunity dropped due to the cut. I’m not sure (exactly what it was). I just know I had a high fever, headaches and vomiting.”

“I tried my best to make the weight and fight, but it wasn’t possible. I wasn’t paid, but I’ll be back. Very soon I’ll be back even stronger.”