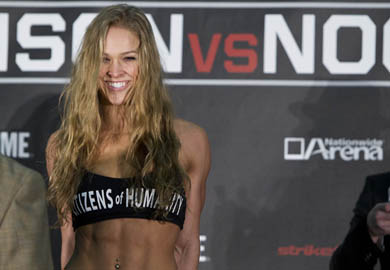 Even though the bout has yet to be announced, sources close to the fight confirmed that the bout is going to happen and that’s good enough for the bookies. With the numbers at a staggering 5-to-1 in favor of the Strikeforce Women’s Bantamweight Champion Ronda Rousey, it’s safe to assume that the odds will not change anytime soon and Kaufman will be walking in as a heavy underdog.

Ronda Rousey walks into her first title defense as a surprisingly heavy favorite at -475. Sarah Kaufman will try to continue the winning streak she has going for her despite the underdog label the bookies gave her with a +325 money line.

If someone were to bet on Ronda Rousey at -475, you have to consider the fact that she is so heavy of a favorite it is going to be difficult and risky to make a profit off of her victory. For every $4.75 you bet on her to win the fight, you will win $1. In order for you to win $100, you’ll have to make a deep bet of $475. However, if you make that bet and Rousey loses then you will lose the full $475.

However, even though Kaufman is the underdog she is still the safest way to make the most money. At +325, for every $1 you bet you will win $3.25. The payoff for a $100 bet will be $325. As you can tell by the “plus” and “minus” before the odds, betting on the underdog is essentially the opposite of betting on the favorite; your chances for winning big money bets increase substantially. The only thing that is constant between betting on the two is if you lose, you’ll lose the full amount of money that you bet on the fight.