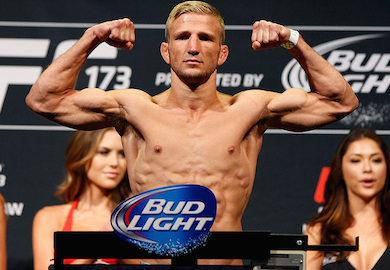 “I fought with both of them. I think that they both deserve the title shot. Obviously, for Barao being such a dominant fighter, he has this right. He is still one of the best pound for pound fighters in the world. He was a great champion, and he was coming in on an impressive win streak. So, whatever Dana White says, I’m in.”

“Definitely I want to face Assuncao. I would love to bring that win back to me. I feel that I won. He shouldn’t be in this spot right now because I won that fight. Obviously it was a close fight and my mistake was letting it go into the judges hands. I had the opportunity to finish it in the first round but I didn’t do it. After that, I let him hit me too much. It was my fault and I would like to get that win.”

In a recent interview with Tatame.com, newly minted UFC bantamweight champion T.J. Dillashaw explained why he’s open to whatever opponent the UFC gives him.

Who should he fight first?