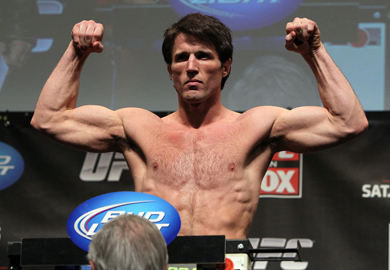 “The American Gangster” originally called out Wanderlei Silva, this after defeating Mauricio “Shogun” Rua in the main event of UFC Fight Night 26 in Boston. Unfortunately that grudge match will have to wait, as “The Axe Murderer” is still recovering from an injury and won’t be ready to go until early 2014.

Obviously nothing is official until the UFC says so, but as far as “Suga” is concerned, he is ready and willing to put his friendship aside to trade leather with his fellow FOX Sports analyst, as he stated on his Instagram:

Its on and poppin!! Today @sonnench Chael extended an invitation I couldn’t turn down! He is my friend but I will put that aside to fight him! We can go back to being friends after I beat that ass!! #ufc167

Both Sonnen and Evans are coming off victories over former PRIDE champions. Sonnen submitted “Shogun” Rua 2 weeks ago in the main event of UFC Fight Night 26 in Boston, while Evans most recent effort saw him score a unanimous decision win over former Pride and Strikeforce champion Dan Henderson at UFC 161 in Winnipeg.

UFC 167 is less than 3 months away, so an opponent for Sonnen should be named by the UFC in the very near future.

Is a fight between Evans and Sonnen one you would like to see made by UFC officials? Let’s hear it Penn Nation!