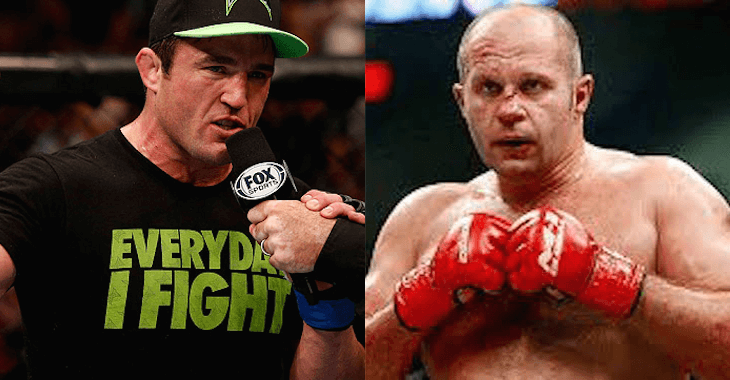 Chael Sonnen is never one to hold back his thoughts on any topic, and he just unleashed a can of audio whoop-a** on PRIDE legend Fedor Emelianenko. Emelianenko recently announced he will be returning to the ring earlier this year and is rumored to announce where he will be fighting next. Fans are clamoring for the former heavyweight champion to make his way to the UFC while others guarantee he will simply be fighting in Russia. Sonnen recently shared his two cents on the return of “The Last Emperor” and they are controversial to say the least.

“Fedor is terrible,” Sonnen told Submission Radio. “And Fedor is a very nice guy. I had the pleasure to meet him twice. The first time, I was in line with him at a Starbucks in a hotel in Los Angeles, and he just blended in. He was just a chubby bald guy, with a nerdy sweater, waiting for his latte like everybody else. And I thought, what a nice guy.”

Sonnen proceeded to analyze Emelianenko’s past fights and came to the conclusion that if there is no commission governing the fight, it shouldn’t go down as a real fight.

“The reality on Fedor is, if you’re not fighting in a commissioned fight, you’re not fighting in a real fight. It has to be a sanctioned commission fight. This comes right back what we were talking about with Holly and her quadrillion boxing championships. If there’s no sanctioning and there’s no credibility and architecture, it doesn’t count. So everything he did in Japan with a referee wearing an earpiece gets thrown out.”

When Fedor came stateside, his performance was less than stellar and Sonnen was quick to point that out. “Fedor got destroyed by guys who are now getting destroyed. Fedor got destroyed by Bigfoot Silva, who by my last count has fought – I believe Frank Mir knocked him out in 18 seconds, I suppose I’d have to re-watch that – but the point is that it’s ridiculous. I think it will sell once. I know that I’ll tune in, I know that the UFC is going to greatly overpay for him, and good for Fedor, man. I think he did everything right, and he is a nice guy. You know, this isn’t my goal to come out and bash a guy, but look, if a guy’s terrible a guy’s terrible. He’s 3-3 in the States, that means he’s 3-3.”

What do you think? Is Fedor Emelianenko truly one of the best in the world still, or is he past his prime? Who could he land a big win over in the octagon? Share your thoughts in the comment section below!