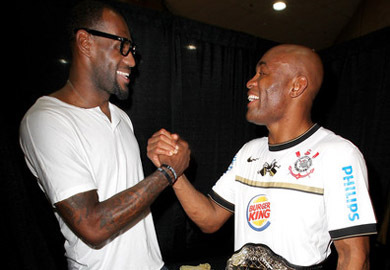 “His name being brought up prompted it. He makes Urkel look cool. I would have liked to call him a twat, but they changed subjects. Let me tell you a story about LeBron. He asked the UFC for tickets for my fight against Anderson Silva. We sit the guy front row, and all through the night he snubs our fans. He’s a guest in our house and he refuses to sign any autographs or take any pictures unless your cup size was later in the alphabet than he was able to learn. And from what I understand, he thinks the letter purple comes after C. This guy walked up to my fiancee backstage and asks her if there’s a Tic Tac in her blouse or if she was just happy to see him. I had a UFC employee tell me he saw a mother wheel her handicapped child up to him to get a picture. Lebron was walking towards them. When he reached the kid, the mother stopped the wheelchair. Lebron took the wheelchair, wheeled it out of the way and kept walking. I’d like to slap the divots right off his face. He’d run away faster than his hairline. His hair went North, his talents went South, and his mother went West.”