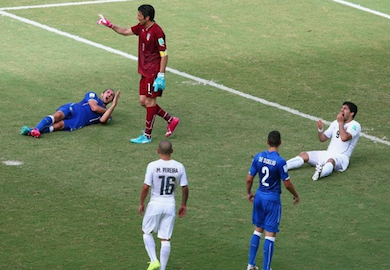 “Lets start with what happened on the soccer field. To bite someone in the course of battle at least somehow makes some kind of sense. To walk up behind a guy and just bite into his shoulder is just a very weird thing to do.”

“Now, they stuck their finger in my mouth. He put his finger in my mouth and was trying to give me the old fishhook, so I gave him just a little, gentle bite to let him know, ‘I will chomp on this thing should you not remove your finger.’ Shady.”