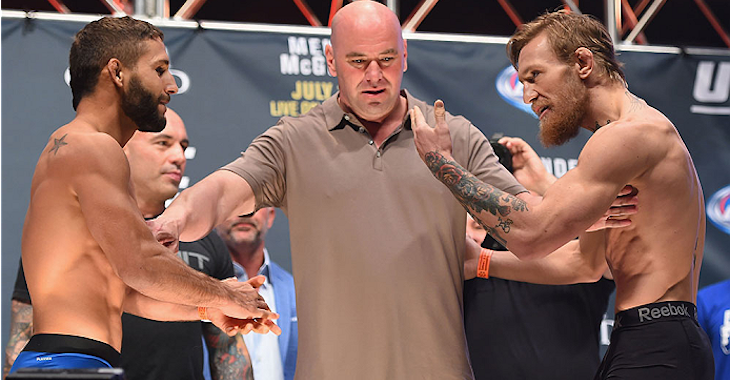 After Jose Aldo was forced to pull out of his fight with Conor McGregor at “UFC 189”, Chad Mendes stepped in to save the card and fight “The Notorious” for the vacant UFC Interim Featherweight Championship. Mendes took the fight on less than two weeks notice, and he believes that if he was given a full training camp he would be walking around with the gold right now.

“110-percent, no doubt in my mind,” Mendes told MMA Fighting. “I’m not making excuses. I’m not sitting here saying that’s the reason why I lost. But I feel that if I am completely prepared for that fight, I win that fight. Every single time.”

McGregor was the talk of the town after the conclusion of “UFC 189” and he already has his sights set on Jose Aldo for a title unification bout. Mendes admits there are nights where he stays awake thinking about the fight. “It’s something I still think about. Sometimes (I) lay in bed still thinking about it. It’s definitely going to take some time to get over it, but you know, that’s just part of the game,” Mendes said.

The Team Alpha Male standout was in full control of the fight in the opening round. Mendes was taking McGregor down at will and it almost looked as if McGregor had nothing to offer from his back.

“I remember in that situation just feeling like, alright, I have complete control here,” Mendes said. “He didn’t feel like he had anything off his back. He wasn’t trying to stand up. He was keeping closed guard. He didn’t feel very strong or very controlling off the bottom, so I figured I’m going to pass guard and I feel like I could probably submit this dude.”

Toward the end of the second round, Mendes abandoned solid position to go for the finish in form of a mounted guillotine. It was a risk he was willing to take in order to win the gold. “We takes risks. We get in there and we fight another human being. And that was a risk that I took. I tried to finish the fight, and he scrambled and he was able to get back to his feet.”

Instead, McGregor wriggled his way out of the hold and made his way back to his feet where he would ultimately end the fight. Mendes was gassed from trying to lock in the hold and he ate body shot after body shot before getting cracked in the face.

“I was stuck, and that’s when he was able to tee off and that’s why I lost. So I truly believe that if I was able to keep that bounce in my step and move my feet, keep that footwork going, that I wouldn’t have been tagged and the round would’ve ended,” Mendes said. “We would’ve gone back and round three would’ve been just like round two. So it sucks. I think that’s the hardest part, because I know I can beat this guy, and I was so close.”

If Mendes never went for the submission in the second round, do you think McGregor would have lost? Share your thoughts in the comment section below!