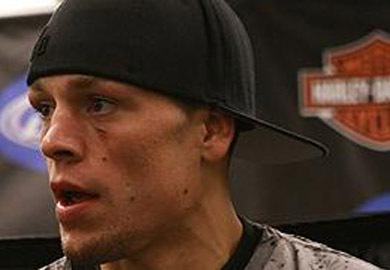 “I don’t think I’ve got a chance of winning any type of decision, so…I gotta go out there and do what I can do to try and finish my opponent; try to be the better fighter and try to win the fight. But, umm, either way – If it goes to decision, I’m gonna to be the one out-scoring, out-pointing. I’m gonna do what I can.”

– Nate Diaz via Inside MMA

“Unfortunately, pretty much it is. You know, it’s almost like in Nick’s case, he figures he’s fighting his opponent and he’s fighting the judges. So he’s gotta finish people. These guys fight like that anyways. They’re gonna fight their hearts out for the team, for themselves, and for the fans. So that’s not gonna change. And, end of the day, I think that’s what we all respect so much about these guys. So yeah, unfortunately, you know, you gotta get those finishes. Or maybe win something so lopsided we get the decision. We saw that with B.J. Penn. I’ve never seen a close decision where the nod was given to the Diaz’s. If it’s close they’re gonna lose. I don’t know why. I think maybe the judges really don’t care for them that much.”

– Cesar Gracie via Inside MMA