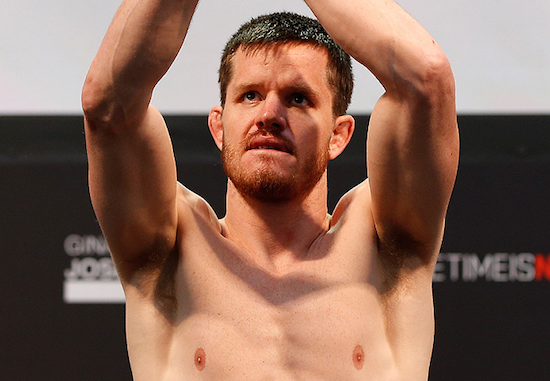 Last night at UFC Fight Night 58, CB Dollaway was on the receiving end of a ‘kick heard round the world’. The liver shot by Lyoto Machida ultimately ended with Dollaway unable to defend himself, forcing the referee to stop the bout.

He spoke at the post-fight press conference about the kick.

“Basically just a body kick, I thought he was going to go to my head, and he slipped it under my elbow, thought I had it covered, took a step back, went to take a breath and couldn’t, was basically paralyzed. So it was kind of a disappointing loss.”

Rollaway went on to answer a question regarding whether or not he suffered a broken rib in the bout.

“I think it was just a liver kick, but it’s getting – feeling a little worse now that the adrenaline is wearing off, but hopefully just a liver kick and I’ll be back in there training soon, and get ready to fight again.”

You can catch the bout highlights HERE if you missed it.