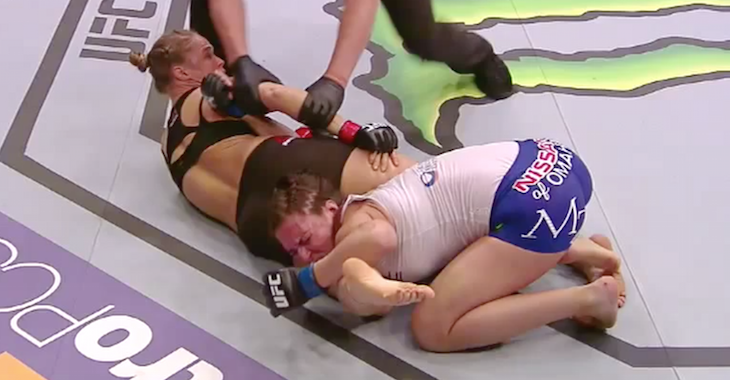 Despite her extended absence from the octagon, Cat Zingano is still viewed as one of the top female bantamweights in the company and some still believe she deserves another shot at gold. “Alpha” possesses an extremely impressive record of 9-1 and it’s hard to argue against her getting a shot at gold… except for the fact that she is coming fresh off a loss to the reigning and defending champion.

“It’s something that’s on my mind all the time,” Zingano said of her loss to Rousey to UFC.COM. “I think about how I want to get out there and fix this huge blemish on my career. I’ve accomplished a ton in this sport, I’ve accomplished a ton in my life in a lot of sports. A big part of my motivation is that I want to get back because I know I have everything it takes to be a champion. I know I have everything it takes to beat Ronda and be the best in the world. It’s just going out there and doing it.”

Zingano challenged UFC Women’s Bantamweight Champion Ronda Rousey for the championship at UFC 184 and was being touted by fans as the greatest challenge to date. Rousey was on a path to greatness and it could have stopped if Zingano played her cards right. Zingnao jumped into the action seconds into the opening bell and paid for it greatly; She lost in just fourteen seconds.

“I feel like everybody has gone out there and kind of waited to see what Ronda was going to do and then reacted to it,” she said. “I’m like, screw that. I’m going to start this fight. I’m going to go first. We’re going to go at my pace. This is the approach I’m going to take. No one’s taken it before so how do we know it doesn’t work?

“I put my throat out there. Ten out of the 14 seconds I was doing pretty good, but then my arm got twisted up, we were in a tangle and I got tapped,” Zingano continued. “Now I have that to go off of. I know exactly what it feels like. I put my hands on her, I’ve experienced her energy. It’s all perspective. It’s something I can put into the knowledge of what I need to do to fix it.”

When Zingano comes back to the octagon, should she fight for the championship right away or should she work her way back up? Share your thoughts in the comment section below!