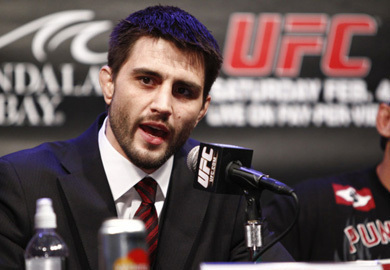 It was announced yesterday that Johny Hendricks will face Carlos Condit as an injury replacement for Rory MacDonald at UFC 158 in Montreal on March 16. Below are official statements from Carlos Condit and his manager, Malki Kawa, regarding the change.

“While I was disappointed to hear that Rory MacDonald is injured, I am glad that the UFC was able to find a strong replacement for the fight in Johny Hendricks. He is one of the toughest Welterweights in the world, and has quickly risen up the ladder in our division. We are similar in that we like to stay active and aggressive in our fights, so this should be a great fight for the fans to watch.”
—Carlos Condit

“I have been training for Rory MacDonald, but there is plenty of time left to switch my focus to Hendricks. With eight weeks left, I will need every moment to be fully prepared for this battle. He’s called me out in the past, and now is his chance to try to back that talk up. I’ll be ready for him.”
—Carlos Condit