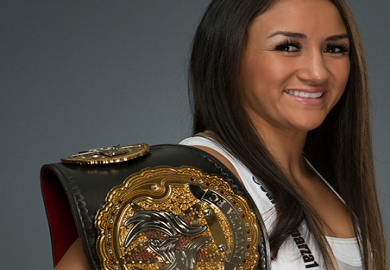 Tecia Torres was infuriated learn that some of her fellow TUF 20 cast mates had been gossiping about her potential steroid usage. Torres fired back at the critics earlier today, which you can read about HERE.

After Torres singled out Carla Esparza in her rant for allegedly gossping about Torres, Esparza took to Sqor to give her take on the situation saying:

“LMAO!!!! You are really going to include my name in this? Alright, so let me start by saying this: for someone who is constantly going on and on about their “college degree” (which I have 1 as well, but don’t go bragging about it), you sure seem to not be able to read! Someone commented: “I’m still confused about Tecia. She looked and moved like a different person.” I responded, “Interesting observation. I’ll say quite a few girls in the house had their theories about that. I’ll just leave it at that.”

Did I say I was accusing you?? Did I say “Yea bc she was totally on roids before and now that she had to be clean for the house, her performance suffered!”?? Nope! Tecia what’s sad is, in a way I defended you saying that if you don’t know for sure without a doubt, you can’t accuse someone. You wanna hear what OTHER people were saying?!? “Oh, that’s why she has that mustache and facial hair bc of all the steroids she’s done.” “Hmm looks like her back acne is clearing up not that she’s forced to be clean.” “She eat like absolute crap, yet still keeps her build.” “Funny how she goes undefeated, but now that she doesn’t have her steroids, she loses.” Tecia, I’m not saying I agree with those statements, and I wasn’t going out of my way to bad mouth you!! That’s just what was said, ok!!? I’m not hating on you, I couldn’t care less about you. So I’m just gonna let this go, enjoy your time at home, have a nice life. Peace”

Esparza, who interacts with fans via Twitter very often, responded to several fan Tweets regarding the incident:

LOL @lrobojew @TeciaTorres what's funny is people would comment on that all the time. People even drew pics of it! So to call me out? #LAME

“@PabloSonning: you think @teciatorres juices? Heard she got weaker as show went on.” Interesting.Guess we will see as the show progresses.

@PabloSonning @TeciaTorres I'm just talking about what went on in the show. People can form their own opinion on the whole juicing thing.

Esparza then responded to a fan who called for the two TUF castmates to fight it out in the Octagon. Something Esparza didn’t shy away from.

“@alstover: I'm a fan of both of you so I'm only going to say that this makes me want to see you two fight more.” I think that' be great!

What do you think PENNation? Do you want to see these Tecia Torres and Carla Esparza duke it out in the Octagon? Let us know in the comments section.