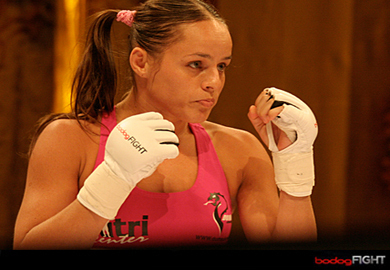 Jason Ellis of Relentless Sports Management spoke to mmajunkie today regarding his client, Carina Damm (18-9 MMA), and her plans to appeal a six-month suspension and $550 fine handed out by the Ohio State Athletic Commission:

“I don’t have all the facts,” Ellis said. “I spoke with Carina and her husband briefly, and my understanding is that she’s not doing anything she’s not supposed to be doing. I was told that she isn’t, so I’m going to support my client and see the facts through.”

Ellis added that Damm told him she did not take performance-enhancing drugs prior to the competition.

This would mark Carina’s second offense in the United States, as the sister of UFC featherweight Rodrigo Damm, was already suspended for one year and fined $2,500 when she tested positive for nandrolone following a win over Sofia Bagherdai at an event in Los Angeles.

Ellis further stated that his fighter endured a hectic buildup to the bout when promoters flew her into Cleveland on the day of the bout’s weigh-ins. He said she had little time to cut the weight and didn’t mean to come in heavier than her opponent Eye, who fights at flyweight.