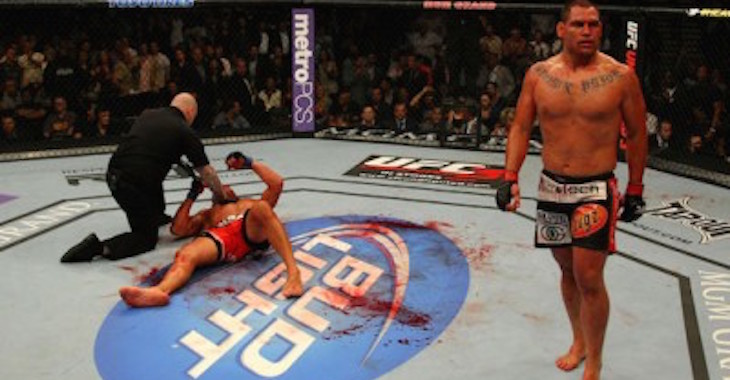 Former UFC heavyweight champion Cain Velasquez is pretty upset with what HBO did with some of his footage.

HBO’s Real Sports did a highly talked about segment on MMA and the connection it has with domestic violence.

They focused on the ‘War Machine’ / Christy Mack case, but also branched out and talked about other cases that have occurred with MMA fighters. During the segment, they used footage of Velasquez. Needless to say, he isn’t very pleased.

Not happy with @RealSportsHBO @HBO using footage of me on their segment of mma and domestic violence.

Do you think it was fair for them to use footage of the former champ, even though he has no prior issues with domestic violence?

The segment featured fighters like Jason ‘Mayhem’ Miller, in a strange interview and then briefly talked about fighters Anthony Johnson, Abel Trujillo and a few others who have had prior domestic violence incidents.
The Best Training Room You’ll Probably Ever See — D.C., Rockhold, Khabib, Velasquez All Training For UFC Greatness
[ooyala code=”J5c3UxdzpDWlYbuxxRyJVVXCUwnYxE3R” player_id=”bd214e34cfad476984102de4bf5e8da2″ width=”1280″ height=”720″ auto=”true”]