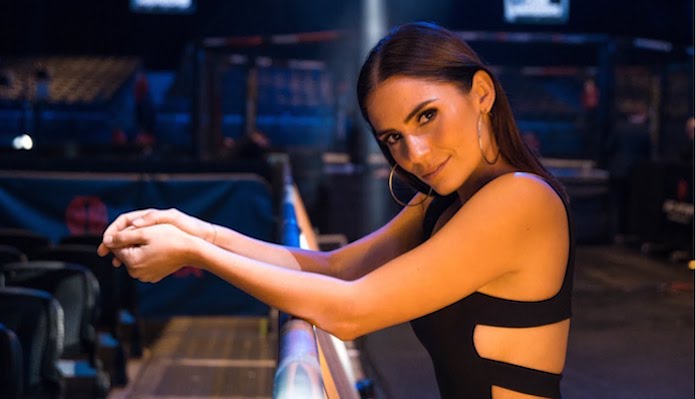 Cage Warriors’ presenter Layla Anna-Lee recently gave BJPENN.com the low down on how she’s been affected by the novel coronavirus. She also responded to backlash over Cage Warriors’ decision to go ahead with Friday night’s CW113 show in spite of the outbreak.

Layla Anna-Lee is a British Brazilian sports presenter covering MMA, boxing and football. She presents for the UK MMA promotion Cage Warriors. The company is home to some of the best emerging talent, with fighters such as Conor McGregor and Michael Bisping having graced its cage in the past.

Despite the coronavirus epidemic, Cage Warriors CEO Graham Boylan has gone above and beyond to keep the upcoming CW113 card this week. The Friday night event was due to take place at the London O2 Arena but was shut down over virus concerns. Boylan and his team announced they have moved Friday night’s CW113 to the Manchester BEC Arena. This garnered some criticism online from fans who questioned if it was irresponsible to go ahead with the risk of infection still so high.

Layla Anna-Lee has updated BJPenn.com on how she has been affected by the virus outbreak and whether future shows will be cancelled.

We’re all in the same boat and as a freelancer and business owner, I’ve taken a massive hit. UEFA Champions League, The Euros, global RedBull events and the EPL being cancelled takes away almost all my work. On a personal level, it naturally creates certain anxieties, I’m trying to stay level headed whilst respecting the severity of the pandemic. We visited grandparents and vulnerable friends a week ago then started to adapt to a more isolated lifestyle. The introvert in me can see the positives of staying home for a while. There’s a lot I can do from home, there’s a lot I’ve been putting off because I was too busy. I’m keen to find a silver lining somewhere.

How has the Cage Warrior’s team and Graham Boylan been affected by the pandemic?

I’m fairly confident every other live sporting event has been cancelled. Cage Warriors is the only one still going and somehow Graham Boylan and his team have managed to move mountains to make this happen. Cage Warriors are good at being two steps ahead. Almost as soon our London venue was announced to close the team announced our move to Manchester. This pandemic has exposed the real team spirit Cage Warriors always had — we’re in this together and we’re all jumping through hoops to keep the event going for the viewers, the fighters and the team.

Do you expect the coronavirus pandemic to affect future shows?

I do. I expect it all to get worse before it gets better. We’re not taking this lightly. I would love for us to be able to continue behind closed doors and trust me, if there’s a way it will continue. However this is being judged carefully and on a day to day basis.

Cage Warriors has received some backlash on Twitter from fans who believe it is irresponsible to continue with the show, what do you think of that?

The full live event as it used to be would be irresponsible, but that is not what we’re doing. This is behind closed doors. A stripped-back minimal crew. All medical testing has been stepped up, the number of people on the ground will be staggered and firm rules have been put in place. I saw an email from the team just this morning reminding fighters that weigh-ins are booked to private time slots and one cornerman only to attend. On the night only pre-registered cornermen are allowed and there no messing with CW rules. If you bring your mum she will be asked to leave!
Although none of us wishes to contribute to the spread, we equally feel a duty to continue to bring live sports programming to the 150 million homes we air to worldwide — now more than ever people need a distraction.

What fight of the night are you looking forward to watching the most?

I’m so excited to see Paddy “The Baddy” Pimblett back in the Cage after so many trials and tribulations I cannot imagine where his head is at! He is so brilliantly entertaining in character and on the mat with submissions that can come from anywhere and this time he’s up against the intense power of Decky Dalton. This will be fireworks!
I’m also filled with pride for the teams’ efforts in picking up two UFC fighters. Darren Stewart vs. Bartosz Fabiński. I’m a big Darren Stewart fan and in this turbulent time and after the cancellation of his London fight, it’s really good to see a parent be able to bring home a paycheck. We’re all just doing our best to look out for each other.