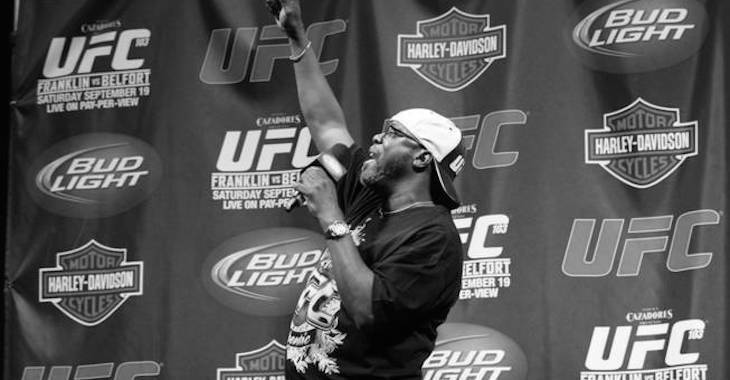 “There was a situation where one of the fighters that didn’t make weight was sent back to the weigh-in areas, where I wait for the fighters. I waited for the fighter for about an hour. When I finally got the fighter and put him on the scale, I was satisfied because he made weight. Now, keep in mind that the arena is 10 minutes away from the hotel. As I normally do, I have my guys take the fighter and the camp back to the hotel. Well, somewhere between me making sure that the fighter made weight and getting back to the hotel, there was, somehow, and I really don’t know, that supposedly the fighter didn’t have a way back to the hotel. Which, still I can’t tell you because I don’t know. I would say that maybe an hour later, someone approached me to address that. And they approached me about it wrongly. Because number one, I knew that I had just seen the fighter and he had just made weight. And ultimately, we were close enough to make sure that everyone got back from the arena. So I was caught off guard with that. I was approached, and it was not in the proper manner. At least I didn’t think I was approached in the proper manner and I was questioned about my work and the way I handled things. That’s the way I felt and I didn’t appreciate it and I didn’t approve of it. And I knew that the fighter was safe, he was not in any kind of detriment and I knew that it was a done deal. And that’s what happened baby.”

In a brand new interview with “The MMA Hour” Burt Watson revealed his reasoning behind his recent UFC departure.

While he stops short of naming names in the snip above, during the interview, Watson revealed that is was Mark Munuz who was left without a ride, which is what sparked the recent unpleasantries.

The former UFC Site Coordinator also made it clear that has no issue with any of the UFC higher ups, including UFC President Dana White and UFC CEO Lorenzo Fertitta.