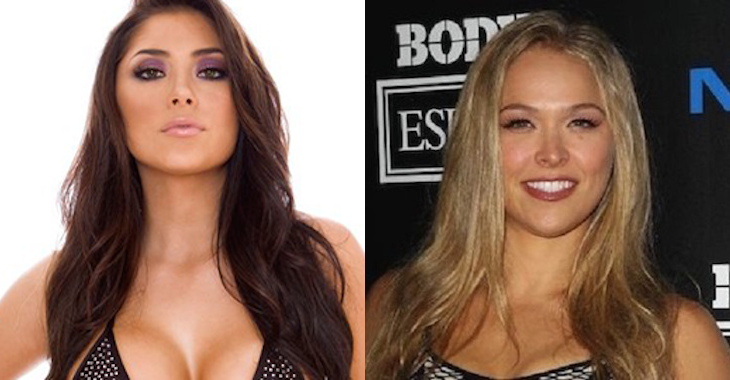 “What did I say that was a bully?” Rousey said. “That the fighters should get paid more than the ring girls? How does that make me a bully? That makes me f*cking right. I’m sorry, but she wouldn’t have a job if it wasn’t for the fighters. She wouldn’t. You think her walking in circles around the two guys or two girls out there fighting for their lives is worth more? Think she works harder than they do… You know what would have been the best thing for her to say? ‘Oh my God, you know, these fighters work so hard and I wouldn’t have a job if it wasn’t for them. I just admire them so much. And yeah, I definitely think that they should get paid more than anybody in the arena tonight.’ There ya go. That’s a PR lesson for her.”

“She (Britney Palmer) went and became a ring card girl to pay her way through art school and become a renowned artist. And her being ring card girl helps her promote her art. If you’re working at Hooters because you’re trying to pay your way through medical school, then f*ckin’ work it girl. I respect the hustle. But don’t think you’re hot sh*t just because you work at Hooters. Use it to further yourself in life; don’t think that you’re awesome just because you do that. I’m sorry, but I’m not impressed with the job in itself.”

During yesterday’s media event, Ronda Rousey fired back at Arianny Celeste, who recently started calling the UFC champ a bully.