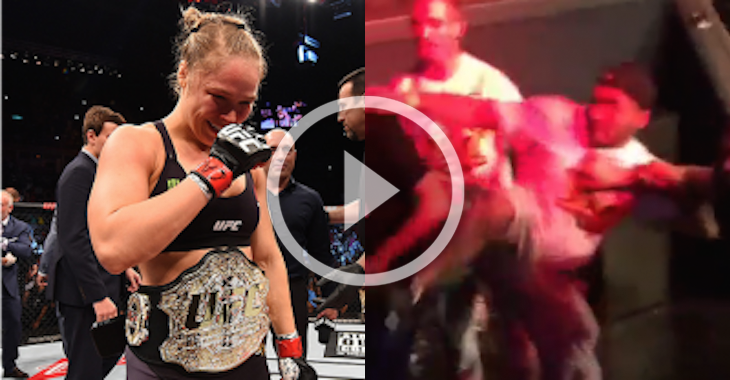 This past weekend was full of major drama and MMA action. On Saturday night we had not one but two big fight cards going on.

We of course had UFC 190, headlined by the champ Ronda Rousey taking on Bethe Correia. But we also had WSOF 22, headlined by an interesting title fight between Rousimar Palhares and Jake Shields.

Both ended in dramatic fashion, Rousey KO’d Correia in 34 seconds and Palhares scratched Shields eyes and cranked a kimura for way to long to win by submission. Oh and there was a major brawl between the Diaz brothers and Khabib Nurmagomedov’s crew at WSOF.

So, what was more exciting: Rousey’s KO or the Diaz/Khabib brawl?

Stud Show Radio host and Team Alpha Male fighter Justin Buchholz gave his opinion and says that there’s no doubt that Rousey’s win was the best thing about MMA this weekend.

“Here’s what I think, you’ve got to go with Ronda Rousey by a million. She was headlining a pay-per-view, the Khabib/Diaz scuffle was just four minutes on Youtube, you couldn’t even see anything. Definitely Ronda Rousey.”

Which one was more exciting to you?
By: Ryan C. Miller | @ryancmiller1630