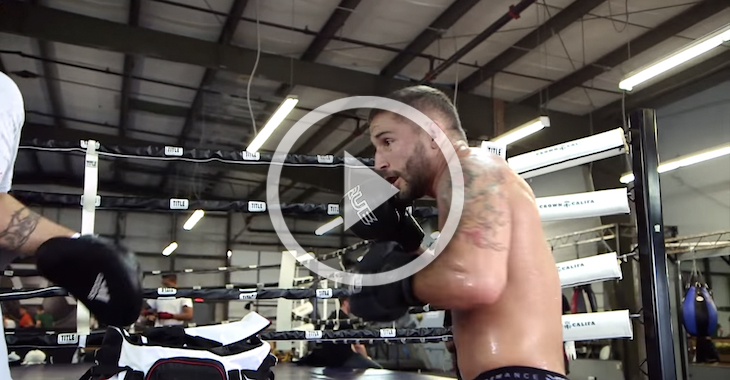 Team Alpha Male’s Chad ‘Money’ Mendes will fight Conor McGregor at UFC 189 for the interim featherweight title. This coming after Jose Aldo pulled out due to his rib injury.

Mendes has been on standby for about a week, ready to fill in at anytime before UFC 189 in the event that Aldo couldn’t go. Now, two weeks out he’s ready to step up.

On last Tuesday nights episode of Stud Show Radio, host, TAM fighter and teammate of Mendes, Justin Buchholz, talked about Mendes preparation and said that they’ve been training 100% ever since the UFC first told them it was a possibility.

“The guy’s a freak, he’s in great shape. The thing is, Chad doesn’t do long camps, 6 weeks top. We knew three weeks ago. A week ago we knew Chad was fighting him 100%. I mean, people were discussing it, but I said ‘Chad, you are 100% fighting this guy’.

“Chad has been preparing 100% for this fight, for three weeks. When Chad is out of camp he’s cycling, he’s running, he’s very active. The guy’s in great shape man, he’s ready to go.”

A caller asked about the hight difference and how Mendes would be able to battle the reach of McGregor.

“Mendes has dynamite in his hands and has never been taken down––Don’t write off Chad’s hands, I think Chad’s a better stand up fighter.”