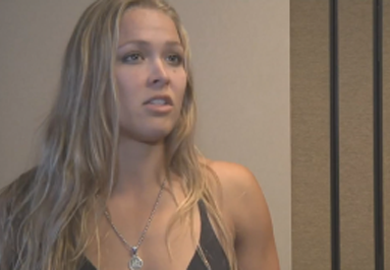 Now, the man fans call ‘Mr. Tate’, has an even greater insight into the personality of his girlfriends nemesis after a lengthy stint coaching opposite her on the current season of the UFC’s hit reality series, ‘The Ultimate Fighter’.

In a recent interview with MMA’s Great Debate, he touched on what he believes to be the champions most standout character flaws.

“Everybody’s eventually going to see that. I think it’s going to be hard for The Ultimate Fighter to edit out how she is. I do believe they have been editing in her favor because she is the UFC world champion. I just want people to see her for who she really is—she’s kind of a stuck up, snotty person and just very bitter all the time, very angry. She seems very, very angry pants all the time. I just hope that gets out.”