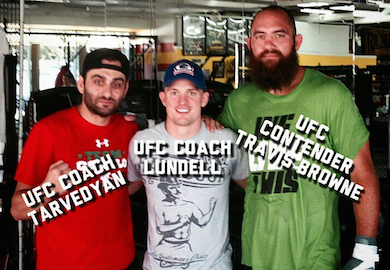 Having spent the majority of his career over at Jackson’s MMA, top UFC heavyweight Travis Browne has a new coaching team.

The Caption Reads,
“Amazing how the world turns. @Rondarousey ‘s coach Edmond Tarvedyan @gfc_diamond and I will be coaching @travisbrownemma together. For the die hard fans you’ll all remember that Edmond and I were on opposite teams for the The Ultimate Fighter Season 18 with Miesha Tate vs Rhonda Rousey. I feel honored and blessed to be able to spend so much time with so many different camps and fighters. Truly lucky to work”