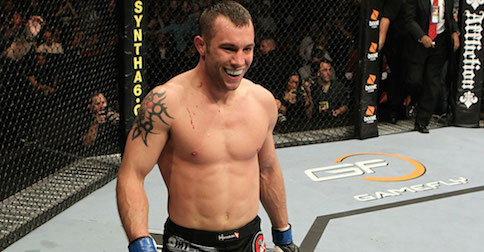 This Saturday, Brian Foster will fight Jake Shields at World Series of Fighting 17 in Las Vegas, NV. Foster is on a 4 fight win streak, having won 8 of his last 9 fights dating all the way back to 2010, when he beat Forrest Petz and Matt Brown in the UFC. To read about Foster’s feelings towards the UFC after cutting him, check this out.

Foster is making his debut with the WSOF, but when he talked with BJPENN.COM he made it clear that no matter what organization he’s apart of, he still sees himself as one of the best in the world.

“Honestly to tell you the truth, it doesn’t matter what organization I’m in. I’m one of the best in the world for a reason. As long as I’m training with a good camp, with good guys, I feel like I can beat anybody in the world. I belong at the top of the division, I belong amongst the best fighters. I feel like I’m the champion of the welterweight division in the World Series of Fighting.”

While it’s rare to hear a fighter talk about his future plans, especially when a tough fight is coming up, Foster says he already knows what he plans to do after beating Shields.

“My plan is to beat Jake Shields, beat Palhares, then trickle my way down to lightweight and capture the titles in both divisions.”

Foster’s been around long enough to know that a fighter like Shields is not someone to overlook, but he feels like it’s his time to shine and go on to bigger things.

“Jake is certified, he’s had his time, he’s made his mark and in whooping his ass I feel like I intake all the glory that he’s come into.”

Foster spent some time breaking down the fight and talking about Shields obvious strengths and what he feels are his weakest areas.

“He’s a one-trick pony. He can’t stand for shit, he can’t wrestle for shit, but he can submit everybody.”

According to Foster, Shields is a, “scared fighter,” who tends to, “push really hard towards that desperate takedown.”

Foster says he doesn’t understand why some fighters try to beat Shields at his own game, and take the fight to the ground. He thinks the smartest thing for him to do would be to, “out strike,” Shields because, “his hands suck, his angles suck.”

Foster ended the interview with a few bold statements, saying, “I want it, I want it more than he’s ever wanted it, I’m sure,” and followed with, “He’s going to look at me and he’s going to question retirement.”