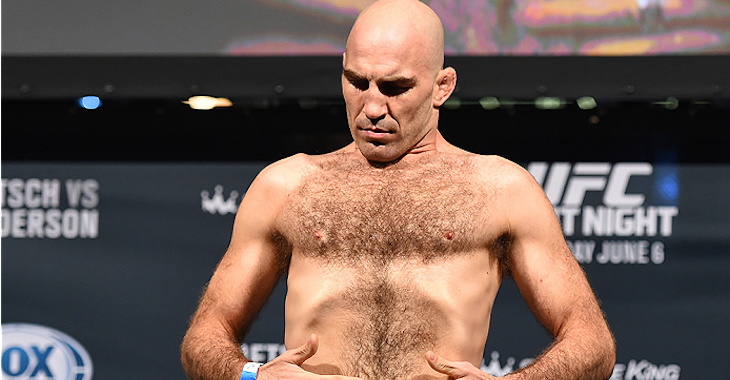 Ebersole competed in an incredible 70 bouts during his MMA career, earning 51 victories to his credit. Brian fought in many different weight classes, including lightweight and even heavyweight, but ultimately found his best success in the 170-pound division.

Here is what the 34-year old welterweight veteran had to say in a post-fight quote distributed by the UFC:

“I’m old, everything hurts,” Ebersole stated. “A lifetime of wrestling takes a toll on you, getting your head pulled, knees banged up – I’m going to leave it to the young guys now. That’s it for me.”

“I’ve had a long career in MMA, a long career in wrestling and this thing [leg] has been bugging me throughout my camp,” Ebersole said. “It was just lingering stuff. You try to go harder, and things start to flare up. I’ve been very bipolar in my training camp: sprint, rest, and rest longer, then wake up and sprint. It’s been hard, a hard camp. The stress of worrying about being healthy and worrying about my performance.. it’s too much. I’ve come a long way. I cheated the system,” Ebersole said. “I was a wrestler my whole life. Once I quit wrestling in college, this [MMA] was the thing I turned to. I extended it another 15 years, I can gracefully hang ’em up and call it a day. The last couple of fights, I’ve really had to tough it out. Fighting rick story really hurt my lower back. I was seeing chiropractors every day for almost two weeks before the fight. That was terrible. Getting the win against John Howard, I thought about it, and was like; man, I’ve got one more year in me before I really settle down and life takes over and my wife wants to get back to work and resume her career. This year was me being greedy.”

Back in the locker room, Ebersole said that when he looked back on it all, the journey was worthwhile:

“I was a decent wrestler, but I never had the accolades of some of these guys like [Daniel] Cormier and [Josh] Koscheck. It was good to come in here and have such a successful MMA career and to get through as many fights as I did, especially early on, without getting beat up. We see it now, when guys have two or three fights and that’s enough. We see guys have one fight and they don’t come back. There are guys who see who they’re fighting on amateur night and don’t show up to the fight. So to be able to push through and fight karate guys, fight boxers, fight big, scary heavyweights, and actually get through that and get to where it turned into an art, instead of a fight, really capped my career off.”

Brian Ebersole made his octagon debut at UFC 127 in February of 2011, where he earned a “Fight of the night” win over Chris Lytle. Ebersole finished with a record of 5-3 while fighting under the Zuffa banner.

Thanks for the memories Mr. Ebersole!