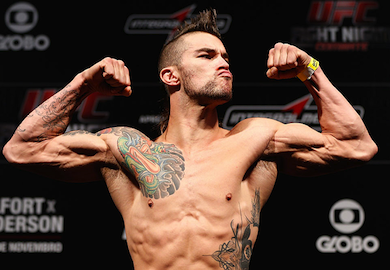 A welterweight showdown between Brandon Thatch and Stephen Thompson will take place on February 14 at a yet to be named UFC Fight Night event in Broomfield, Colorado.

Brandon Thatch (11-1 MMA, 2-0 UFC) will be looking to extend his current win streak to eleven when he fights “Wonderboy” in his backyard of Denver, Colorado, this February. Thatch was last seen in action in November of 2013, where he scored a first-round KO victory over Paulo Thiago. An injury has kept the 29-year-old sidelined for the entire 2014 year.

The February 14 “UFC Fight Night” event takes place at Broomfield Colorado’s 1STBANK Center. Broadcast plans have yet to be confirmed, but the main card is expected to air on FOX Sports 1.

Who do you have winning this welterweight contest? Sound off Penn Nation!