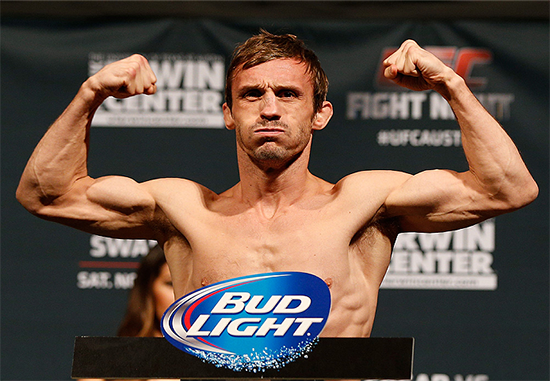 Following a 1-2 run inside the UFC’s flyweight division, Brad Pickett (24-10 MMA, 4-5 UFC) has decided to return to the bantamweight ranks.

Pickett suffered a split-decision loss to Chico Camus at last month’s UFC Fight Night 57 event, which marked the Englishman’s second loss in a row at 125-pounds.

Pickett recently spoke with Telegraph Sport, where he confirmed his plans:

“I’m going to go back up a weight class,” Pickett told Telegraph Sport. “The weight cut was tough for me to make, but also the matchups in that weight class are just not that interesting to me. It’s not fun chasing a guy for 15 minutes in the hope he’ll fight you.

“I’m too old for that now. I want to be involved in good fights. A fight I’d like to have at bantamweight is someone like (Takeya Mizugaki). He’s an old veteran, I’m an old veteran, and we’d both slug it out and put on a great fight for the fans. That’s what it’s all about for me now.”

Mizugaki was most recently seen in action at September’s UFC 178 event, where he suffered a quick 61-second KO loss to former bantamweight champion Dominick Cruz.

Is a fight between Pickett and Mizugaki one you would like to see put together by UFC officials? Sound off Penn Nation!