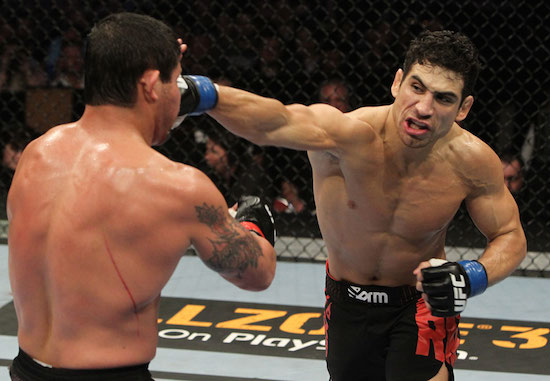 The UFC’s matchmaking department has been on overdrive this week, matching at least 13 new fights to upcoming events.

In addition to the new fight announcements, changes have also come down the pipe to already existing fight cards, and bouts.

As previously reported, a bantamweight title fight between Ronda Rousey and Cat Zingano has been stripped from their original Vegas date at UFC 182, and put on the ‘UFC 184:Weidman vs. Belfort’ card, in Los Angeles. (Details Here)

UFC Fight Night 55 got a reshuffle as well, when Neil Seery opted out of his contest, due to injury, making way for Louis Somlka to fight Richie Vaculik.

In new fight bookings, the aforementioned UFC Fight Night 56, featuring a new main event between Mauricio “Shogun” Rua and Ovince St. Preux, got a new addition to the night’s preliminary card, in the form of a featherweight contest between Diego Rivas and Rodolfo Rubio.

In the co-main event, Benson Henderson will take on Eddie Alvarez (Full Breakdown). In lightweight action, Jorge Masvidal will take on Norman Parke. And in middleweight action Uriah Hall and Costas Philippou have agreed to battle.

UFC 182 got three new bookings this week. UFC officials announced a co-main event between Donald Cerrone and Myles Jury (Full Breakdown), and another lightweight contest between Danny Castillo (Pictured) and Rustam Khabilov. The UFC brass also announced a preliminary card addition, in the form of Omari Akhmedov vs. Mats Nilsson.

Lastly, UFC 183 got an intriguing middleweight fight between Tim “The Barbarian” Boetsch and Thales Leites.

In other news, it was revealed this week that 15 of the 16 TUF 20 females will be making their UFC debut on the TUF 20 Finale card. (Details Here).