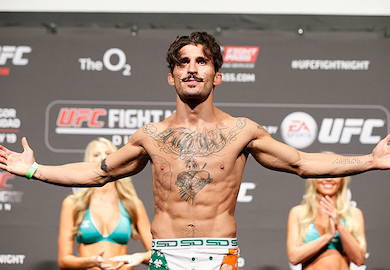 The UFC’s matchmaking department has been busy this week, matching 16 of their roster holders to future opponents and fight cards.

In the latest booking roundup, we have new fights in the UFC’s flyweight division (125lbs) all the way through Heavyweight (265lb limit).

Top UFC flyweight’s Ian McCall (pictured) and John Lineker have agreed to square off, on November 8th, during the UFC’s yet to be announced Fight Night 56 event in Brazil.  The bout could put the winner into title contention.

A lightweight contest between Daron Cruickshank and Anthony Njokuani will serve as the final booking for the UFC’s upcoming Halifax card. With the latest addition, the October 4th event brings Canadian fans 12 compelling bouts, including a headliner between Rory MacDonald and Tarec Saffiedine.

UFC 179 gets the bulk of new bouts, with the addition of four fights. Scott Jorgensen and Wilson Reis have agreed to a flyweight bout, Andre Fili is set to face Felipe Arantes in lightweight action, Neil Magny will return against fellow welterweight William Macario, and Fabricio Camoes will take on Josh Shockley in a lightweight bout. UFC 179 takes place from Rio de Janeiro  on October 25.

In November, Heavyweights Jared Rosholt and Oleksiy Oliynyk have agreed to square off for Texas fans as part of the UFC Fight Night 57 event in Austin. The FOX Sports 1 event takes place at the Frank Erwin Center on the campus of the University of Texas in Austin.

Also on the Austin card is a Middleweight bout between Luke Barnatt and Roger Narvaez.