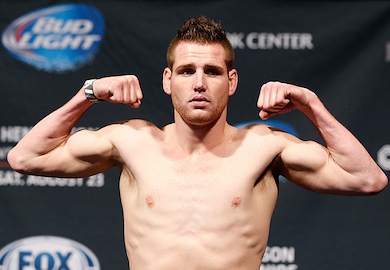 Catch up with all of the bookings the UFC has made this week for upcoming evens!

First off we have Jared Cannonier vs. Shawn Jordan, who will meet at UFC 182 on January 3rd. Cannonier who is undefeated in his 7 fight pro career will be making his promotional debut at the event against Shawn Jordan, who is coming off a TKO win over Jack May back in August.

Next we have Dan Miller vs. Daniel Safian at UFC Fight Night 58 in Brazil on December 20th. Miller will be stepping into the cage for the first time since March of 2013 when he suffered a TKO loss to Jordan Mein. His opponent, Daniel Safian will be riding a 2 fight losing streak into the bout in what is likely a ‘win or be cut’ situation.

Next up we have a very exciting matchup between Thiago Alves and Jordan Mein at UFC 183 on January 31st. Alves made his return to the Octagon back at UFC on FOX 11 and looked dominant as he defeated Seth Baczynski, but has been on the sidelines with a knee injury since. His opponent, Jordan Mein is on a two fight win streak that most recently saw him TKO Mike Pyle back in August.

Next is Jake Collier vs. Vitor Miranda at UFC Fight Night 58 in Brazil on December 20th. Collier will be making his debut at the event, but will be riding a 5 fight win streak into the bout, and has finished 7 of his opponents in 8 career wins. He will be facing Vitor Miranda, who lost in the TUF Brazil 3 finale after KOing 3 of his opponents on the show.

Next up we have Alex White vs. Clay Collard, which will be taking place at UFC 181 on December 6th in Las Vegas. White is 10-1 in his pro career, with his only loss coming in his UFC debut back in July. He will be facing Clay Collard who also lost his UFC debut, which took place back in August.

Last but certainly not least we have Andy Enz vs. Thiago Santos, which takes place at UFC 183 in January. Enz is 0-2 in his UFC career, and is likely in a ‘win or be cut’ situation when he faces Santos. Santos on the other hand is 1-2 in his UFC career, with his most recent outing being a decision loss to Uriah Hall at UFC 175 on July 5th.