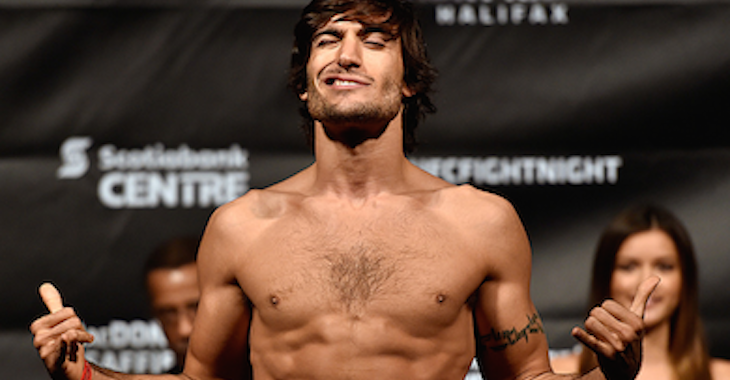 As always, the UFC has been incredibly busy creating matchups for upcoming cards, as well as re-arranging bouts due to injuries.

Catch up with all of the latest matchmaking happenings with BJPENN.com’s Booking Roundup

Next up we have Elias Theodorou vs. Roger Narvaez which goes down at UFC 185 on March 14th from Dallas Texas. Theodorou is riding a 10-fight win streak that has seen him go undefeated in his professional career and 2-0 under the UFC banner, whereas Narvaez is coming off a close split decision win over Luke Barnatt.

Next up we have Paul Felder vs. Jim Miller which goes down April 18th at UFC on FOX 15 in New Jersey. Elder is coming off a recent win over Danny Castillo, which extended his win streak to 2. Miller on the other hand is coming off a TKO loss to Donald Cerrone, which served as his return bout in the Octagon after being sidelined.

Next up we have Daron Cruickshank vs. Beneil Dariush, which will go down at UFC 185 in Dallas on March 14th. Cruickshank is coming off a No-contest against KJ Noons where he suffered a torn tear-duct and the bout was called off. Dariush on the other hand is riding a 2-fight win streak into the bout that most recently saw him defeat Carlos Diego Ferreira at UFC 179.

Here we have a bout cancellation, with Jacare Souza being forced out of his UFC 184 bout against Yoel Romero due to pneumonia.

Next up we have Eddie Gordon vs. Chris Dempsey, which will go down April 18th at UFC on FOX 15 in New Jersey. Gordon is coming off a brutal KO loss to Josh Samman, whereas Dempsey lost to Ilir Latifi at UFC Fight Night 46 via KO.

Next up we have Jim Alers vs. Chas Skelly at UFC Fight Night Colorado on February 14th. Alers is coming off a split decision win in his UFC debut, whereas Skelly is riding a 2-fight win streak that saw him rebound from his UFC debut loss impressively.

Last but certainly not least we have Dustin Poirier vs. Diego Ferreira, which goes down April 4th at UFC Fight Night 63. Poirier is coming off a TKO loss to Conor McGregor, while Ferreira is coming off a loss to Beneil Dariush, which was the first loss of his pro career.

In addition to the above-mentioned bouts, Johny Hendricks is slated to fight Matt Brown, Henry Cejudo will meet Chris Cariaso, Sergio Pettis will drop to flyweight to fight Ryan Benoit, Felice Herrig is slated to fight Paige Van Zant, and Carla Esparza will be defending her strawweight title against Joanna Jedrzejczyk. We previously reported all of these bouts.