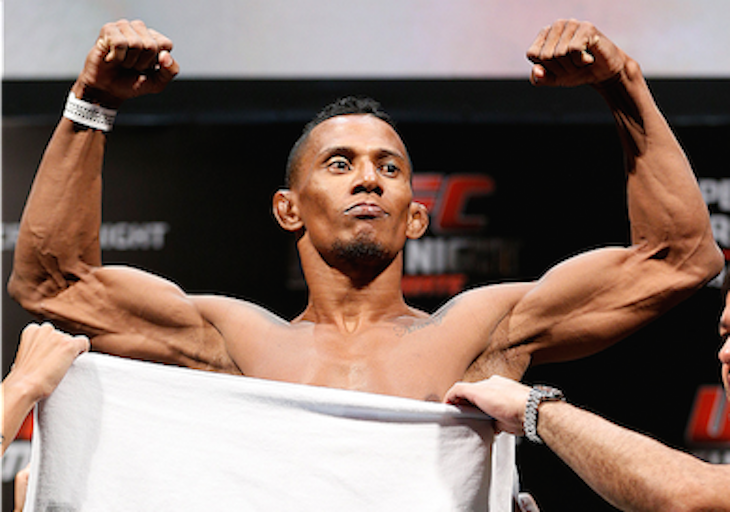 This week, as always, the UFC has been busy booking several bouts for upcoming events in the new year.

Catch up with all of the latest happenings in the UFC matchmaking realm with BJPENN.com’s Booking Roundup!

First up we have a late opponent change for January 24th’s UFC on FOX 14 in Sweden. Mairbek Taisumov will now be facing Anthony Christodoulou, who will be making his UFC debut at the event. Taisumov is coming off a TKO win, whereas Christodoulou makes his debut on a 7-fight win streak.

Next up we have Iuri Alcantara vs. Frankie Saenz, which will go down at UFC Fight Night 61 on February 22nd. Alcantara went 3-0 in 2014 after losing to Urijah Faber in 2013. Saenz will be coming off a win in his UFC debut over Nolan Ticman, and looking to gain steam with a win over a veteran in Alcantara.

Also on UFC Fight Night 61 will be Tiago Dos Santos vs. Mike De La Torre. Dos Santos rides an 11 fight win streak into the bout that most recently saw him pick up a win in his UFC debut over Akbarh Arreola. De La Torre on the other hand is still seeking his first promotional win after going 0-2 before having a loss turned to a NC after Brian Ortega tested positive for PEDs.

Next up we have James Krause vs. Valmir Lazaro, which will go down at UFC 184 on February 28th. Krause is coming off a decision loss to Jorge Masvidal, and has hopscotched wins and losses throughout his 4 fights with the UFC. Lazaro on the other hand had his 11-fight win streak snapped in his promotional debut at the hands of James Vick.

Last but certainly not least we have Louis Taylor stepping in to fight highlight reel KO artist Uriah Hall at UFC Fight Night Boston on January 18th. Taylor is riding a 4-fight win streak into his UFC debut that includes a win over former Bellator and UFC fighter Brian Houston, and a win under the Bellator banner. His opponent, Uriah Hall is riding a 2-fight win streak that saw him defeat and retire Chris Leben, and most recently defeat Thiago Santos despite having his toe snapped nearly off.

Stay tuned to BJPENN.com for all of your MMA news!