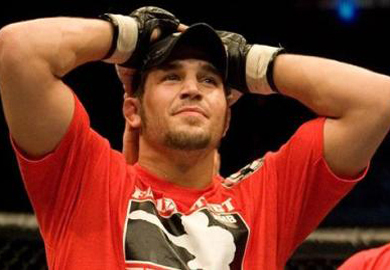 Voelker is currently riding a three-fight win streak that includes a pair of second-round TKO’s over Roger Bowling in Strikeforce. Voelker, who went 4-1 under the Strikeforce banner, has not enetered the cage since his last victory in July of 2011.

Voelker now faces Cote, who recently announced on Twitter that he was dropping to the welterweight division, stating the following: “After a year of thinking and good talk with my coaches and [nutritionist, it’s] time. My next fight will be at 170. Thanks for the support.”

Cote returned to the UFC this past July, where he suffered a unanimous decision loss to Cung Le at UFC 148. He most recently saw action at UFC 154 in Montreal, where he scored a win over Alessio Sakara, albeit by DQ. The victory marked his first in the promotion since a July 2008 split-decision win over Ricardo Almeida at UFC 86.

UFC 158 is set to go down March 16, 2013 at the Bell Centre in Montreal, Canada. The event is headlined by a welterweight title fight between champ Georges St.Pierre and his nemisis Nick Diaz.