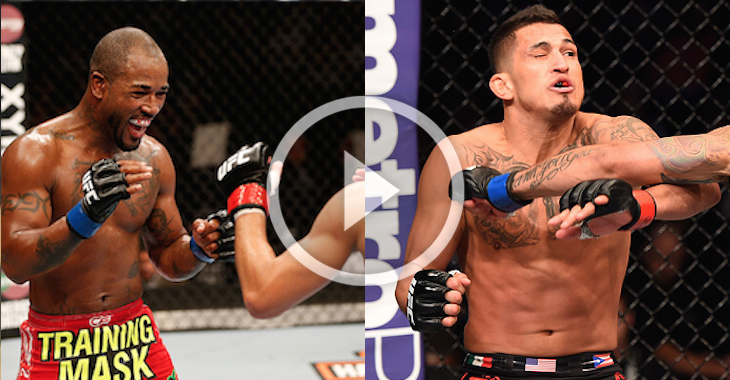 UFC lightweight Bobby ‘King’ Green joined BJPENN.COM Radio and gave his thoughts on the much talked about fight between Anthony Pettis and Rafael dos Anjos.

“Let me point this fact our for you real quick. I think he hurt his MCL or ACL two weeks before the fight, who does that and still goes into the fight, fights their a*s off, kicks and knees and punches like no problem?”

“This guys got super better. His cardio’s gotten better, his chin’s gotten better and like everything, something’s going on. Did you hear Anthony [Pettis]? He was like ‘I don’t know what happened, I don’t know what went wrong, I thought everything was great. Camp went great, I can’t figure out what I did wrong.’ You didn’t do nothing wrong Ant, you didn’t do nothing wrong, you just don’t know what happened because you got bamboozled, you got played. You got played bro. That’s the way it is. Look at him, look at your body look at his body.”

“You’ve got to look at the writing on the wall for some of these guys. Look at their bodies. This guy goes five rounds non-stop, takes every shot like nothing, come on now.”

“I’m not even attacking him, I’m just going got let it be known that he’s a great fighter, I saw his talents, I saw him coming. But the point is that it looks a little funny to me, that’s all I’m saying.”

It’s clear to see that Green believes the new champ is perhaps using some sort of performance-enhancing drugs. The UFC 185 drug tests came back clean for all the athletes on the card, including Dos Anjos.

Is it just a case of growing as a fighter and reaching your true potential, or could there be something aiding Dos Anjos in his rise to glory? Green seems to have made up his mind on the question, what do you guys think? Sound off in the comments.