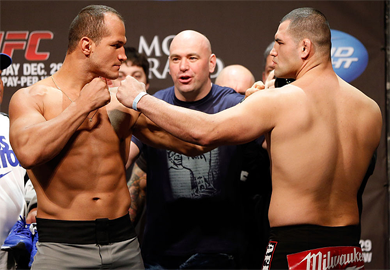 Who Will Win The Main Event?

This is tough, I think it could go either way really but until someone can show me why I should go against Dos Santos then I’m going to go with Dos Santos. I think Cain will be able to get the fight to the ground this time but then we’ll get to see the BJJ skills of the Champ. JDS by submission-choke is how I think it’ll go. JDS is a black belt in BJJ and the only fighter with that kind of ground game that Cain fought was Nogueira but Cain didn’t give him a chance to showcase it because he knocked him out in the first round. Junior Dos Santos is on a roll and I think he’s going to be tough for anyone to beat and this is a perfect chance to see his other skills. Now that doesn’t mean I wont be surprised to see Cain get caught and knocked out again, I just think it’ll be a ground fight for the most part, but can’t wait it’ll be a great fight.

My money’s on JDS. As an Hispanic person, I am a huge fan of “Brown Pride,” and I love what Cain Velasquez has done for the sport and Hispanic Americans the world over. He is one tough SOB who has mastered the art of the TKO. This guy, along with Alistair Overeem, basically retired Brock Lesnar from the sport. But Velasquez’s victories just aren’t as compelling to me as JDS’s wins.

Why? Because Junior dos Santos, he’s something different. When the Good Lord was passing out fists to the rest of us, He gave dos Santos cinder blocks instead. Not only has dos Santos pretty much decimated the Heavyweight Division, he’s already knocked out Velasquez. I have no reason to think their next fight will end any differently.

Dos Santos has said he could knock out the “boring” Wladimir Klitschko, and frankly, I believe him. To his credit, Cain Velasquez is one bad man, and in a world without dos Santos in it, he may very well be the Heavyweight Champion. But alas, that’s not reality. My prediction? Dos Santos by cinder block to the head.

Junior dos Santos. His knockout power and takedown defense will prove to be Cain’s undoing once again. I anticipate (and hope) that this fight will go longer then their first encounter but I would guess that in ends within the first 2 rounds. Both men have but one blemish on their records respectively, but in my opinion, JDS has faced the tougher competition. Ask yourself this, who is Cain’s biggest signature win? His defeat of Brock Lesnar in 2010 perhaps? That version of Lesnar was more like Bob Sapp with heart if you ask me.  Or maybe it was his knockout victory over Big Nog in 2010? Though that win was dominant, it took place at the late stages of Big Nog’s career, where knocking him out was not nearly considered to be the feet that it once was. Don’t get me wrong, Velasquez is surely a top 5 heavyweight, he just doesn’t have the tools in his arsenal to defeat the Baddest Man on the Planet.

A lot of people are calling this bout a toss up, while I agree both men are elite and very talented, I think it isn’t as close as folks make it out to be. Cain is a great wrestler, and has taken down nearly all of his opponents, but I still question his chin. Cheick Kongo hurt Velasquez a few times in their fight, and I’m willing to bet that JDS hits harder than Kongo. Cain will push the pace, and has all the skills to be champion again, but I think the punching power of Dos Santos is going to be the deciding factor. I think when JDS lands, this fight is over. JDS via KO before the third round is my prediction.

Junior Dos Santos wins this fight because he is a finisher. He finds a way to win and has dynamite in his hands. Velasquez has good takedown ability and defense. This is obvious to any fan. I cannot see a way that he knocks out or submits the current UFC Heavyweight Champion. Overall, I think Cain may indeed be the more well rounded fighter in appearance because Junior has flattened every person they threw in front of him or beat them up pretty bad. The only reason he had to go the ground was to follow their limp bodies and punish them until the referee pulled him off. I think Junior wins by TKO.

Velasquez. In the first bout, as soon as Velasquez walked out you could tell he wasn’t himself. Sure JDS was hurt too, but I think Velasquez was hurt worse. Velasquez’s game plan depended much more on his mobility than JDS’s game plan. The bottom line is: he got caught standing still. I think if Velasquez gets inside, cuts off that fancy footwork, and initiates the clinch up against the fence, we’re looking at a much more competitive fight that I believe Velasquez will grind out with takedowns or finish with ground and pound.

Both fighters have fought once since their first fight a year ago. JDS picked apart Frank Mir before finishing him and Cain brutally defeated Big Foot. We’ve all heard how Cain wasn’t 100% before his last fight and how we should expect to see the Cain Velasquez that showed up in his last fight. Cain’s wrestling is clearly his advantage, but he’s going to have to figure out a way to keep JDS down to use it. On the feet, I feel there’s no better heavyweight striker than JDS. And the scary thing is, JDS is getting better with each performance. The first fight lasted just over a minute. I think this one will go longer, but I expect the results to be the same. I’m saying the UFC champ successfully defends his title with a TKO in round 3.

As much as I like Cain Velasquez and admire him as a true mixed martial artist I have to go with my gut and take Junior Dos Santos in this highly anticipated rematch for the UFC heavyweight title. With that being said I still feel, just like I did before they fought the last time, that these are indeed the two best heavies in the world today. Cain is extremely well rounded and has such an incredible skill set that it makes it really hard to bet against him. However, The Champ (Dos Santos) is unrealistically accurate with his strikes and he seems to get better with every single fight. Junior looks stronger, faster, and more confident than he did when the two met in November of 2011 and that could spell serious trouble for Cain. Velasquez is going to have to rely on his versatility and wrestling background to tire Junior and close the space, in-and-out, in order to stay away from Juniors heavy hands. In my opinion Cain’s best chance of winning this fight is by getting Junior to the ground and winning each round through the judges’ scorecards. If Cain is not able to dictate the pace, distance, and grappling of the fight early on then this fight

could end very quickly again for Velasquez. And something else to note: both fighters have only one loss notched on their records but Cain’s loss (which came at the hands of Junior) was a KO. I tend to always side with the guy that has the solid chin and has been KOed the least. Although Cain has only been put out once, Junior has never had his lights turned out. Instead, he turns off others’ power lines and stacks up knockouts like they’re poker chips. Again, if Cain cannot dictate the pace and distance early in the fight we could see a quick first-round repeat of the two’s last meeting. Because of the size, striking accuracy, takedown defense, and pure boxing skill of Junior Dos Santos I’m giving him my nod and saying he remains the champion of the UFC heavyweight division with a second round KO of Cain Velasquez.

Junior Dos Santos will defeat Cain Velasquez. Dos Santos is arguably the best boxer in the UFC, with the kind of explosive power that ends fights with one punch.  Velasquez is an accomplished wrestler, but with an outstanding 88% takedown defense rate it will not be easy to put Junior Dos Santos on his back. Even if Velasquez manages to get JDS down, he still has a lot of work to do, JDS trains with Team Nogueira and some of the best BJJ practitioners in the world, as well as holding a black belt in BJJ under the Nogueira brothers. Junior Dos Santos says he’s out to prove he is the baddest man on the planet, and Saturday night he will have the chance to come one step closer to proving it.