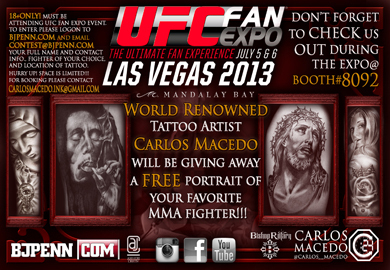 BJPENN.COM, in conjunction with Carlos Macedo of Vatican Studio’s, is pleased to announce the launch of a new and innovative competition for MMA Fans going to this year’s UFC Fan Expo in Las Vegas, Nevada.

The Culture of tattoos and body art has slowly and consistently infiltrated all aspects of global life, including that of the greatest sport in the world, Mixed Martial Arts. Not only do we see cleverly artistic tattoos on the sports’ biggest stars, but more and more fans of the sport adorn themselves with the symbols and personalities of the UFC and MMA in general.

Geared towards MMA Fans who will be attending this year’s UFC Fan Expo in Las Vegas, Nevada, ‘MORE THAN INK” will give contest entrants a chance to get a free and original tattoo from one of the world’s most renowned artists, Carlos Macedo.

“I am so excited to be a part of this year’s UFC Fan Expo,” stated Mr. Macedo. “I am first and foremost an artist and to spread my art throughout the world is my goal and dream.”

Carlos Macedo is an avid MMA fan that specializes in black and white portraits and realistic art pieces. His abilities have launched him through the tattoo ranks in competitions and helped him build an A-list celebrity clientele that features names such as P-Diddy and The Game, among others. His award winning works of art have also been featured in several publications including popular T.V. shows.

BJPENN.COM is proud to extend this once in a lifetime opportunity to our entire audience of fans and subscribers as well as anyone who visits the BJPENN.COM domain.

To enter the contest, simply email contest@bjpenn.com with the following list of specifications. The winner will be selected in a random drawing.

– Entrant must be 18+
– One entry per person
– Contestants must attend this year’s UFC Fan Expo in Las Vegas
– Email contest@bjpenn.com with the following information: