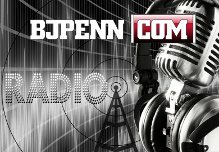 BJPenn.Com Radio is back and we are super excited to hit the air waves with the line up we have for out first week back.

Our first guest to open the new show, is now the new Interim Bellator Champ Will Brooks. We have plenty to talk to Will about from his match up against Michael Chandler and walking away with the belt, to what it means to be the champ and have the interim belt. We will get his thoughts on Eddie Alvarez and his recent comments about Will being the easier fight, and of course his goals for the rest of the year and long term. Don’t miss the start of the show, cause just like our guest Will Brooks, we’re coming out swinging. Follow Will on Twitter @illwillbrooks86 Our second guest has never had it easy and I’m sure he would tell you he knew his route to becoming a champ would be very similar. John Moraga is set to step back into the Octagon June 7, 2014 at UFC Fight Night: Henderson vs. Khabilov against John Dodson. We will talk to John about getting a chance to fight the man who gave him his first loss, the current status of the 125 lb. division, his hometown, and how his path to the title has changed since entering the UFC. Follow John on Twitter @ChicanoJohn This first show is stacked like Tony Ferguson’s Varsity Letterman Jacket. Speaking of Tony, he’s our next guest and we of course have to touch on how he lettered 12 times in High School. Tony is coming off a big win at UFC 173 against Katsunori Kikuno with a nice TKO in the first round and stopping Kihuno’s 6 fight win streak. We will talk to Tony about his early days and how it has helped him become the athlete that he is now, stepping up each fight to face better competition, along with how life has changed in the gym and day to day since winning The Ultimate Fighter. Follow Tony on Twitter @TonyFergusonXT Closing out the show is a man who is looking to put the Nightmare to bed. Ross Pearson is back and he’s preparing to go to war with Diego Sanchez on June 7, 2014 at UFC Fight Night: Henderson vs. Khabilov. We will talk to Ross about this fight, his place in the division, traveling back and forth for camp, and of course we have to talk to Ross about his latest shoe game picks ups and what he is looking forward to dropping this year. Ross always brings a solid interview and this time won’t be any different. We will also pick Ross’s brain on some of the latest things going on inside the sport of Mixed Martial Arts. Follow Ross on Twitter @RossTheRealDeal

Follow our Producer Doc Drew @FISTtaCUFF our Co-Host Denny “The Mad One” Hodge @ProMMANowDenny and our Main Host Anton Skoro @FISTtaCUFFRadio. Tune in each and every Sunday for the only MMA Podcast that doesn’t pull punches.