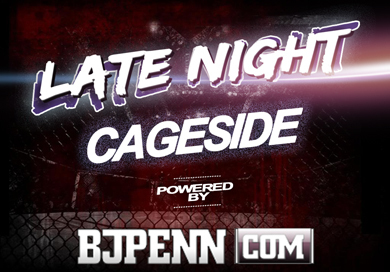 BJPENN.COM is happy to announce the launch of a brand new live MMA radio show, “Late Night Cageside” hosted by Tony Kamps and Chase Raymond. The show will air on Monday nights starting at 10/9CT, with the first show airing on April 1, 2013.

The focus of the show will be on the major issues in world of mixed martial arts. The hosts will breakdown upcoming events in the UFC, Bellator, and other organizations. They will also be interviewing the top-level fighters from those same organizations.

“Late Night Cageside is the next step in the evolution of the BJPENN.COM radio station. For years it’s been our dream to provide multiple outlets for our fans to get the best in MMA News Coverage, and now with the addition of this great platform we are one step closer to making those dreams a reality.” – Pedro Carrasco, Director of Content BJPENN.COM

Tony Kamps and Chase Raymond currently write for BJPENN.COM, so their knowledge and resources within the sport will be pivotal in the success of the show. Both hosts are excited to showcase their talents in a different form of media other than just print.

“This is exciting for me. Chase and I will give everyone a fair shake, but we won’t hold back either. If there is an issue that needs to be talked about we will talk about it, no matter what. We are going to bring a new level of excellence to MMA radio.” – Tony Kamps, Host of Late Night Cageside

“I couldn’t be happier bringing our show to BJPENN.COM; we’re surrounded by the most talented web guys in the business. Our show will be very fan friendly and more interactive than most other MMA internet radio shows.” – Chase Raymond, Host of Late Night Cageside

After a decade of on-line operation BJPENN.COM has evolved into the most reliable destination for all your fighter interviews, fighter blogs and MMA/UFC news stories.