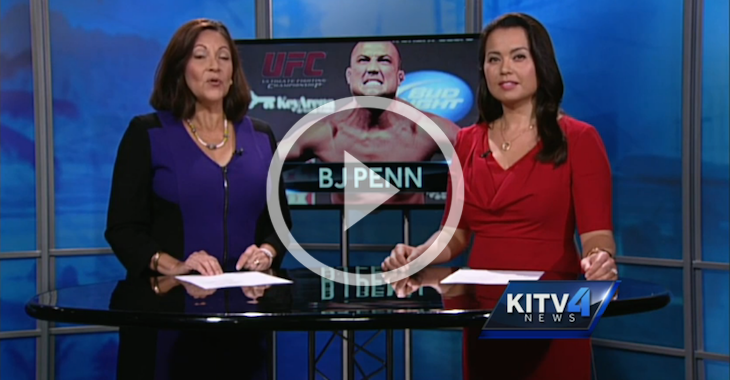 HONOLULU —He’s one of only two fighters to win world titles in two separate weight classes. And next month, he’ll be honored for that feature when he is officially enshrined into the UFC Hall of Fame.

BJ Penn, now retired, is KITV’s Hawaii MVP this week, but, as our Brandi Higa reports, the “Prodigy” may not be done just yet.

“The biggest regret would be if I didn’t get in the ring tonight because I’d always wonder, and I’d always kick myself in the butt and I’d always complain to Dana and complain to everybody, like man, I could’ve did it again, but now I know for sure that I can’t,” said Penn.

Last July, UFC President Dana White said Penn was responsible for helping build the UFC, that it was his legacy. It came during an emotional revelation from Hawaii’s most famous fighter who announced that he was done, a moment that many considered the end of an era.

Fast forward 11 months, Penn says there’s one thing that could lure him back into the Octagon.

“If a UFC event can come here and they can put on a real show, I think the only venue would be Aloha Stadium. That would just be another level right there. That would be crazy,” said Penn.

And for many, seeing BJ back in the Octagon in Hawaii would be just that – crazy. It’s a word that many also use to describe his career.

“He build the 155 lb division. He’s a legend. He helped build the UFC and the list goes on and on and on of what BJ Penn has done,” said White.

So when it came to being inducted into the UFC Hall of Fame, it wasn’t a matter of if but when.

“He owns a UFC BJ Penn Gym in Hawaii. What more do you want BJ? There’s nothing left to prove,” said White.

His favorite moment? It’s not one of his knockout victories nor even a win by submission.

“My favorite moment ever was the first time I ever walked into the Octagon. They’re playing that old music, and I just remember walking in here thinking, this is it. I got to prove myself against somebody who’s actually trained also. I’m not just a street punk. I’m not just a troublemaker. I’m going to prove to myself and to everybody else that I’m above that.”