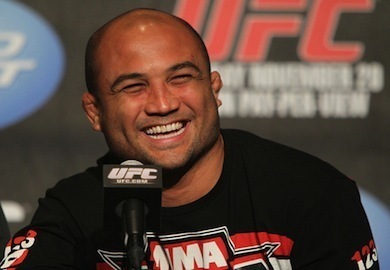 As confirmed by UFC Tonight, former UFC lightweight and welterweight champion, B.J. Penn will return to action to coach the 19th season of The Ultimate Fighter against Frankie Edgar. They will be coaching fighters in both the middleweight and light-heavyweight divisions.

UFC president, Dana White stated on UFC tonight that he had originally planned on pitting Urijah Faber against Edgar as coaches of TUF but the two could not agree on a weight class in which to compete. Around the same time as the UFC struggled with finding two suitable coaches, Penn requested, in a text to White, Penn expressed his desire for a top caliber lightweight opponent. White also stated that Penn is extremely motivated for this opportunity in a new division.

Here is White talking about Penn’s return in a recent press release:

“BJ Penn is moving down to 145 lbs. to coach The Ultimate Fighter against Frankie Edgar,” said UFC President Dana White. “BJ really hates the fact that he lost to Frankie Edgar. It’s something that’s been burning deep inside of him for three years now. So he’s moving down to 145 lbs. to not only avenge those defeats, but to try and become the first fighter in UFC history to win titles in three different weight classes.”

Penn has now agreed to drop to featherweight for the first time in his career and take on Edgar for a third meeting. This will be the first time they have faced each other without a UFC title being on the line.

As for the fight, an undetermined date and venue will house the third matchup once the season wraps up. The season debuts in April of 2014 on Fox Sports 1.

Penn will fight in the fifth weight class of his professional career, this being the lightest. Penn was unsuccessful in winning his last bout, a welterweight fight with Rory MacDonald last December that went to the judges scorecards.

Edgar has already made the drop to 145-pounds, losing his debut bout to featherweight champion, Jose Aldo. Edgar bounced back though, winning a memorable fight with Charles Oliveira at UFC 162. Edgar defeated Penn at UFC 112 in 2010 to take the UFC lightweight title from ‘The Prodigy’ and retained his belt in the rematch at UFC 118.