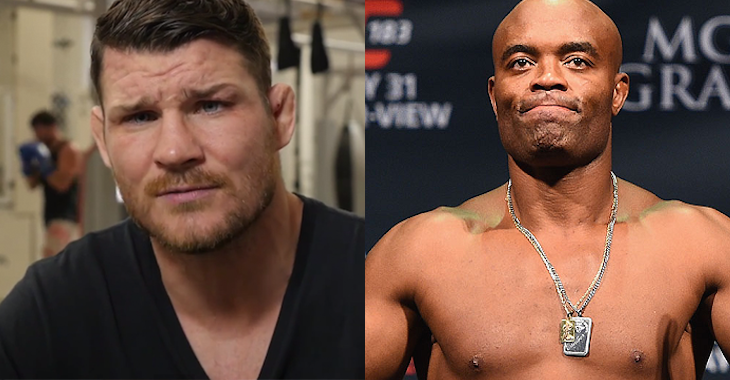 Michael Bisping is quick to call out testosterone replacement therapy users like Vitor Belfort, but when it comes to someone like Anderson “The Spider” Silva, Bisping will hold his judgement until his hearing.

Anderson Silva and Nick Diaz put on a dream fight at UFC 183, but the bout would soon be surrounded in controversy after the card’s conclusion. Silva failed a pre-fight drug test for performance enhancing drugs while Diaz came up positive for marijuana metabolites in his post-fight drug test.

“Anderson was, for a long time, a hero of mine even though we were in the same weight class and I wanted to fight him for so long. You couldn’t not admire and respect what he did inside the Octagon.”

Bisping always seemed to be one step away from a championship fight with Silva when he was the reigning champion. If Silva eventually makes a return to the octagon, Bisping stated he would still like to fight “The Spider”.

“Of course, the things that he did still stand, but there has been a bit of a cloud lately. It was a shame to hear about the test results,” Bisping stated. “It’s just disappointing. Would I still like to fight the guy? Of course, I would. I’d love to get in there in the Octagon with him, but he has fallen a little bit recently. It’s not something that’s the burning issue that it once was.”

“The sentence hasn’t been delivered,” Bisping said, eluding to the fact that Silva hasn’t had his hearing yet. “We’re yet to see what happens, so I reserve my judgement until the athletic commission’s made their decision.”