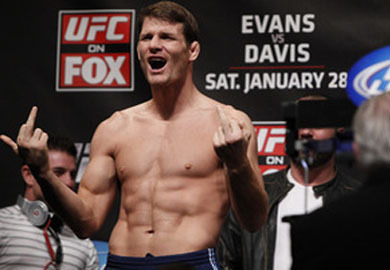 As we all have learned over the past several years, British middleweight Michael “The Count” Bisping rarely has a filter.

As such, while in attendance at the UFC 152 pre-fight press-conference, “The Count” told onlookers that he felt his fight with Brain Stann should be placed higher than the flyweight title fight between Joseph Benavidez and Demetrious Johnson.

Later on, UFC.com caught up with Benavidez where he was quoted in saying, “I definitely hit harder than Bisping.”

What happened next was taken straight from the pages of twitter.com: check it out –

Bisping @bisping
@ufc urijah favour,Joseph benavidez and the rest of the munchkin crew talk s— cos theyre stuck in the body’s of pre pubescent boys
and I’ll take the Pepsi challenge with smug faced little shit any time.

Urijah Faber @UrijahFaber
Thought we were buddies @bisping I know u can dish it out but can’t take it back @ufc ur like a spoiled 3rd grader. Grow up.