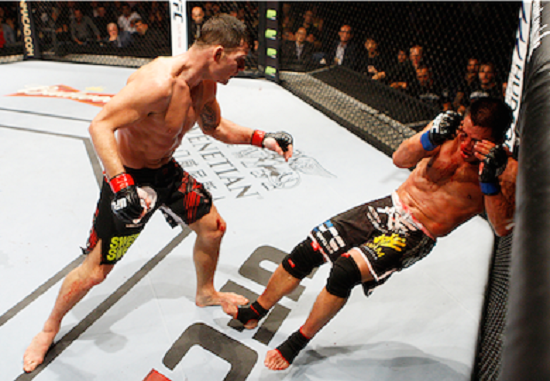 Michael Bisping is a veteran in the UFC, with 21 UFC fights in 31 professional career fights. Several of Bisping’s losses however come at the hands of fighters who were on TRT, and even tested positive for PEDs.

With Bisping being on the cusp of a title shot several times throughout his career, many fans have wondered where Bisping would have been if he hadn’t lost to those fighters when he was so close to a title shot.

Bisping tries not to dwell on the past however, and he spoke to MMAJunkie about his career.

“I suppose if I really think about it and work myself up about it, yeah, I could do that, but realistically, I accepted those fights, and I knew what I was getting into. The way I see it, you’ve got to take it like a man. You dust yourself off, and you get back in there.”

“If people’s testosterone levels can be 10 times higher than what it normally is, of course that’s going to give you an edge. Like this morning, my body was sore because I’ve been training real hard, and my body just can’t do it. So I planned that today I’d take the morning off and do nothing, because I need to. Perhaps if I was taking testosterone or whatever medicine these guys took, I wouldn’t need to have taken this morning off. I would have recovered better and had more muscle mass and hit harder and run faster. Those things all help.”

“Would things have been different? Yes, probably. Am I bitter about it? No, I’m not. I try to take it like a man, and get on with the rest of my life.”