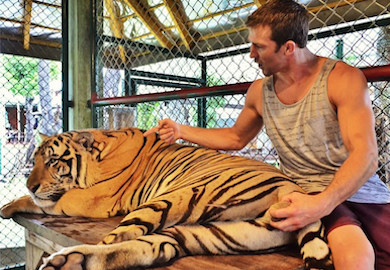 “[My dad and I] were both nursing a bit of a hangover because we had a couple of drinks the night before, and we’re just having a coffee and catching up. Obviously I live in America and he lives in England, so now that all the excitement of the fight and all that stuff was over, we’re just having a conversation catching up on old times. And, lo and behold, there [Rockhold] comes walking over, looking a little bleary-eyed himself. He was probably still feeling the effects for sure, because I’m sure in the cold light of day he wouldn’t come up and start challenging somebody to a fight outside of the Octagon whilst out with family members. I certainly wouldn’t do that, and I’d like to think he wouldn’t.

“So he comes over: ‘Hey Bisping, one round. Come on, I’ll finish you in one round and I want your purse.’ He started going on about that stupid bet that he does, and I just said, ‘Look at the state of ya. Go home, sober up, and stop making a fool out of yourself.’

“Maybe if I was younger. There might have been a situation when we were having the coffee. But in this occasion, I’d done all my fighting the night before, and I’m a professional, so I just ignored him. I laughed at him, I took the higher ground. But make no mistake, I do want to fight that guy, for sure. He needs to be taught a lesson. He needs to be put in his place.”

“But I’ll have a gentleman’s bet. I’ll challenge him to a fight, and the winner takes all, you know what I mean? I’ve never been finished in one round in my life. I’ve certainly never been finished in one round like he did against (Vitor) Belfort. So he just needs to shut up, really, and focus on his fights. I see him hanging out at pool parties, he’s cupping tigers’ balls. The real question is, did he take that tiger to a pool party after he was done feeling him up? The guy slowly but surely is turning into a bit of a laughingstock. Just get back to business, get back to winning fights, and people will take you seriously again.”
…
“Luke Rockhold talks a lot of s–t. He knows. That sparring we had that day, he got his ass kicked as he knows it so he’s coming out with all this crap,” Bisping vowed. “That fight ends one way: with me winning.”

In a recent interview with “The MMA Hour” Michael Bisping fired back at Luke Rockhold for several call-outs, and he also shared this personal story about a real-life encounter while in Macau.