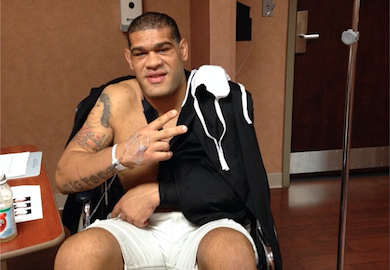 We learned from the most recent episode of UFC Tonight, that UFC heavyweight Antonio “Bigfoot” Silva is already eyeing a certain someone for his next fight. That being said whoever he ends up fighting will have to wait four more months due to the fact that Silva is currently serving a 9 month suspension for having raised testosterone levels in his fight against Mark Hunt back in December.

In that fight, which earned Fight of the Night honors, Silva and Hunt went back and forth and it was ultimately ruled a draw. Unfortunately for Silva, he was forced to give back the 50,000 dollar bonus after testing positive for high testosterone. He was also given the suspension, but it seems he is ready to get back and wants to fight Josh Barnett upon his return.

“Josh sees no professional reason to not fight Bigfoot. We don’t have any issues with him, so if Silva really wants to do this, he really needs to think about it first. Because we won’t take something like this lightly.”

Barnett last fought at UFC 168, where he was knocked out in the first round by Travis Browne. According to Silva’s manager, the fighter will be undergoing a surgical procedure to remove a benign tumor on his pituitary gland. This is an effort to get his testosterone levels down to normal.