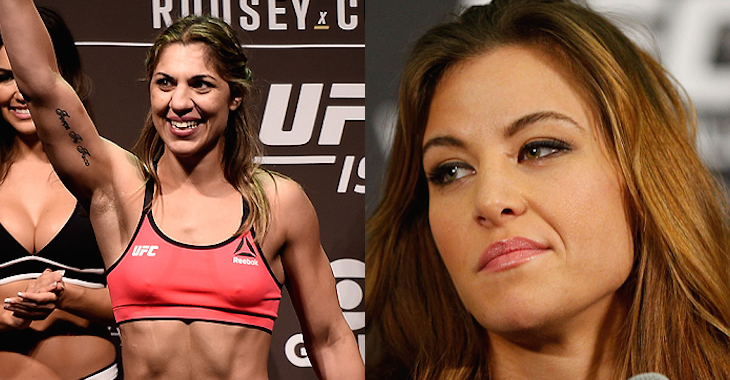 Bethe Correia was dealt her first loss at “UFC 190” when she was dominated by Ronda Rousey in less than forty seconds. It was her impressive winning streak that got her a shot at the gold, but Correia truly made a name for herself when she trash-talked Rousey into a rage.

As the old saying goes, “If it ain’t broke, don’t fix it.” Correia is back to her trash-talking ways and now has her sights set on Miesha Tate! Tate was expected to challenge Rousey for her championship for a third time, but was caught off guard when UFC gave Holly Holm the opportunity instead.

With both bantamweights looking for a fight, Correia is doing her best trying rustle Tate’s feathers by saying that the UFC has no interest in her as a champion!

I bet I'll fight for the title again before you @MieshaTate sorry! UFC has no interest on you @seanshelby @ufc @ufc_brasil

Miesha Tate is currently riding a four fight win streak and is the top ranked women’s bantamweight just under champion Ronda Rousey. Bethe Correia, on the other hand, was sent out of the top five when “Rowdy” face planted her in just thirty four seconds at “UFC 190”. Do you think Correia will be successful in goading Tate into a bout with her? If not, who is next for Tate? Share your thoughts and predictions in the comment section below!