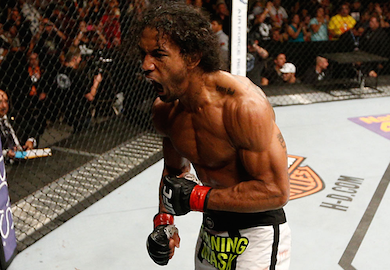 It looks like Benson Henderson won’t get a long layoff after his submission win over Rustam Khabilov earlier this month. Now the former lightweight champion is slated to face Rafael Dos Anjos on August 23rd at the BOK Center in Tulsa Oklahoma at UFC Fight Night 49.

After losing his lightweight title to Anthony Pettis last year, Benson Henderson bounced back by going on a two fight win streak against Josh Thomson and Rustam Khabilov.

Rafael Dos Anjos on the other hand bounced back from a loss to Khabib Nurmagomedov at UFC Fight Night 42 against Jason High, winning by TKO. With a win over Henderson, the #5 ranked Dos Anjos would make a big move towards earning a title shot.