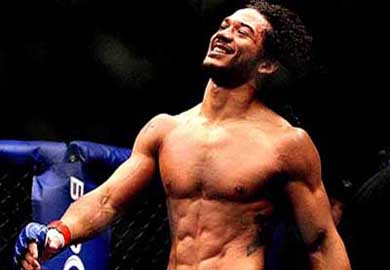 “I think it’s good to have goals. For some reason I caught a lot of slack when I said I wanted to break Anderson Silva’s record and people were saying, ‘Oh, you’re ridiculous for thinking that. You can’t beat Anderson Silva’s record. You haven’t defended your belt one time. You’re silly. What are you talking like that for?” It’s like wow guys, you guys are really mad at me for having longterm goals? I want to be the best ever and one of my goals is to break Anderson’s record for title defenses. I’m sorry, I apologize if I offended you somehow, but I do have longterm goals, I like to set my goals high and then go out and get them done. If you want to be a Mundial champion, if you want to be a black belt and win the Pan-Ams, you want to win the worlds, win the Europeans, then you should bust your butt and train like it,” Henderson said.

While a guest on MMA Weekly Radio, UFC lightweight champion Benson Henderson went on the record to defend his comments pertaining to beating Anderson Silva’s win streak and title defense records so that he can be considered the greatest of all-time.

Apparently some of the MMA community and fans took his words as offensive, but the champ states he just has big goals!

Nothing wrong with shooting for the stars, right?

Check out the full audio from the interview in the player below.